A network can be defined as a channel, media and set of rules that allow two computers to exchange data. The connection between the computers is established over wired or wireless media.

With traditional networking, the data and control plane are housed in physical devices called routers. These devices act like gatekeepers and make the routing decisions regarding what to do with inbound and outbound packets. They also follow industry specific standards but have some custom proprietary technology which make users prefer one vendor’s hardware over another’s.

The change from traditional networking to SDN can be attributed to changes in today’s computing world where applications are no longer designed for one application per server. Most applications today are likely to have geographically located replicated databases and parallel processing across a number of servers for redundancy and performance reasons. This greatly changes the traffic pattern, necessitating a change in how the network traffic is routed.

One way to conceptualize this is through the human anatomy whose most important part is the brain. The brain controls the flow of information and the activities of different body organs. The cloud is, in retrospect, similar to a living organism with the network as the brain. While medical scientists still have not figured out how to successfully transplant a brain from one living organism to another, VMware scientists have; not the human head, of-course, but the brain that controls the cloud. The intelligence of the cloud follows the application.

NSX is the name of the VMware brain. It is a network virtualization platform that allows you to move your network’s intelligence from physical infrastructure to a software platform allowing you to achive total ITaaS.

All this might look good on paper but the best way to demonstrate this is through an example: Node Africa has built its cloud offering on VMware and has explicitly built its network on NSX, achieving total ITaaS. When we first started, we were only serving a handful of customers but the situation changed rapidly. This resulted in a need for immediate upgrades on the existing infrastructure to enable the company to continue adequately serving existing and new customers. Normally this would have involved days of planning and preparation. However, the current ITaaS setup allowed the Node Africa team to upgrade both network and hardware during peak hours and with no downtime. Better yet it was all done in a single day.

NSX allowed the Node Africa team the ability to surgically divorce the network from the infrastructure without taking down the running services in real-time. 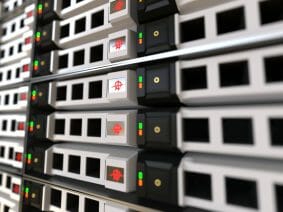